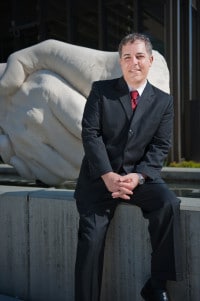 Voted one of Sacramento’s Top Lawyers by fellow attorneys

Sacramento attorney Timothy Kassouni founded Kassouni Law on the belief that property rights and personal freedom are intertwined. He passionately considers it his duty and mission to rigorously defend property rights against government and private abuse. Mr. Kassouni has many years of experience litigating against private and public entities at all levels of court, including the United States Supreme Court, the California Supreme Court, the California Court of Appeal, and the Ninth Circuit Court of Appeals to name a few. His litigation expertise in land use, appeals, business, and property rights law has led to legal victories and the setting of legal precedents throughout the state of California.

Born in New York, and later spending parts of his childhood in both the California Central Valley and Los Angeles, Mr. Kassouni has a history of interaction with clients from all walks of life, from small farmers to large commercial developers. Further, one could say Mr. Kassouni’s legal career began on the school playground, where he often defended classmates from bullies -an instinct that survives to this day.

After completing a judicial externship at the California Supreme Court for Justice David N. Eagleson, Mr. Kassouni worked as an attorney for some of California’s most prestigious legal organizations before founding his own law firm in 2009 including the Sacramento County District Attorney’s Office, the Pacific Legal Foundation, the Newport Beach business and land use litigation firm of Hamilton & Samuels, and the Constitutional property rights practice of Zumbrun Law. While at the Zumbrun Law Firm, Mr. Kassouni served as both senior attorney and legal director to the firm. His legal experience includes complex land use, Constitutional property rights, appeals, business, real estate, and construction litigation in Los Angeles, San Francisco, Orange and Sacramento Counties.

Timothy Kassouni is a Loyola Law School graduate with an undergraduate degree from the University of California at Berkeley. While at Loyola, Mr. Kassouni studied eminent domain and inverse condemnation law under professor Gideon Kanner, a leading scholar and attorney in the property rights field. Mr. Kassouni later received the first Fritz B. Burns Foundation public interest fellowship with the Pacific Legal Foundation. He credits the Pacific Legal Foundation and Professor Kanner as having nurtured his passion to continue in the land use and Constitutional property rights field.

Obtained over $2 million in damages and over $700,000.00 in attorney’s fees for a storage facility company after a two week trial on an inverse condemnation claim against the County of Alameda. The County of Alameda had wrongly applied a growth control measure to the project which delayed construction and resulted in lost income and increased construction costs. In a groundbreaking published decision, the Court of Appeal unanimously upheld the award of damages and attorney’s fees, characterizing the County’s arguments as convoluted “nonsense”.

Oral argument and amicus curiae briefing before the California Supreme Court in Beverly Towers Inc. v. City of West Hollywood. This case established the precedent that local governments do not have the right to enforce condominium conversion regulations after the property owner has obtained all discretionary approvals.

Invalidation of non-competition covenant in complex litigation action in Los Angeles County Superior Court against a publicly traded corporation on behalf of large group of orthodontists, which triggered a multi-million dollar nationwide settlement.

Client was charged with illegal grading. The County of Riverside expunged the notice of violation and dropped all charges one week before the trial. Ken Shayne comments: “I had super results with this firm and would recommend [Kassouni Law] to anyone who needs help. He was honest, very fair, and truly concerned about the injustice I was going through.”

Mr. Kassouni has written many published articles including the law review article “The Ripeness Doctrine and the Judicial Relegation of Constitutionally Protected Property Rights,” which has been cited numerous times by scholars in the land use field.

“The Ripeness Doctrine and the Judicial Relegation of Constitutionally Protected Property Rights” – Timothy V. Kassouni California Western Law Review – Vol. 29 No. 1 – Fall, 1992
Abstract: This article describes the traditional role and definition of the ripeness doctrine, and how courts have modified that traditional role and definition to create unusually harsh and burdensome procedural barriers for private property owners when they seek compensation for a taking under the Fifth Amendment. The article has been cited by numerous scholars as a leading authority on the issue of ripeness, and has also been cited in congressional hearings related to property rights.

The following articles have been published in California’s leading legal newspapers -San Francisco’s The Daily Journal and Sacramento’s Daily Reporter: