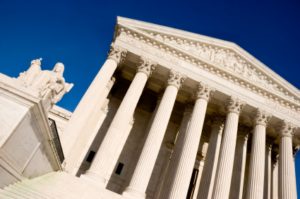 Recently, Kassouni Law submitted an amicus brief to the U.S. Supreme Court on behalf of the The Pelican Institute for Public Policy. The Institute is a nonpartisan research and educational organization—a think tank—and the leading voice for free markets in Louisiana. The Pelican Institute’s mission is to conduct research and analysis that advances sound policies based on free enterprise, individual liberty, and constitution-ally limited government.

Timothy V. Kassouni of Kassouni Law was honored to be selected counsel of record for the Pelican Institute in its United States Supreme Court Amicus Curiae Brief in Support of the Petition for Writ of Certiorari in the important property rights case of Cedar Point Nursery v. Hassid. The United Stated Supreme Court granted review, and oral argument is expected to take place in the Spring of 2021. Mr. Kassouni worked with Pelican Institute counsel Sarah Harbison in preparing the amicus brief.

In this case, Cal. code regs. tit. 8, § 20900, allows union organizer representatives to enter private agricultural business properties to recruit members. The union is allowed to determine the time, place, and manner of their recruitment efforts at these businesses, which included the Cedar Point Nursery Farm, which is the Plaintiff in the case.

Organizers may enter the property for purposes of soliciting workers one hour before the start of work, one hour after work, and during lunch. Id. at § 20900(e)(3)(A)-(B). The regulation does not provide that the union give any advance notice of its visit to the site; service on the employer is sufficient. Id. at § 20900(e)(1)(B).

Union organizers showed up at Cedar Point Nursery at a time that would cause maximum disruption—at the end of the strawberry harvest. The nursery would presumably be at its busiest harvesting a perishable crop and would have the most seasonal workers present. At a time any other business would choose to exclude the union organizers, Cedar Point was forced to welcome them.

Yet the fundamental right of a private property owner to exclude those who would interfere with the quiet enjoyment of their property is one constant that emerged from cases rooted in the Fifth Amendment’s Takings Clause. The U.S. Supreme Court acknowledged in 1897, “in a free government, almost all other rights would become worthless if the government possessed an uncontrollable power over the private fortune of every citizen.” Chicago, B. & Q.R. Co. v. City of Chicago, 166 U.S. 226, 236 (1897). Justice Brandeis wrote in 1918, “[a]n essential element of individual private property is the legal right to exclude others from enjoying it.” Int’l News Serv. v. Associated Press, 248 U.S. 215, 250 (1918) (Brandeis, J. dissenting).

The Cedar Point Nursery is expected to accommodate union organizers at a time they will be the most disruptive. The access regulation is a command to include that ignores the long-recognized right to exclude. Cedar Point is unable to regulate the time in which the union representatives enter their properties, “regardless of any interference it might pose” with their growing operations. Their right to exclude would not be regulated, it would be eviscerated.

The property attorney team at Kassouni Law is confident that the U.S. Supreme Court will correct the 9th Circuit decision against the Cedar Point Nursery, and confirm the Constitutional right to exclude those who would interfere with the quiet enjoyment of private property.