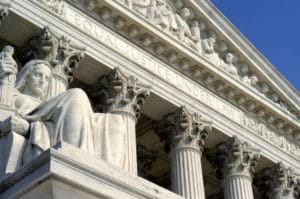 The Supreme Court will Impact Property Rights when it Decides Kisor v. Wilkie

As we predicted, the Court did not strike down Auer. Justice Roberts joined justices Kagan, Breyer, Sotomayor, and Ginsburg to maintain Auer deference, at least in theory. The majority opinion did limit the reach of Auer, however. This blog post will try to unpack the new rules as they appear in the opinion.

The big takeaway from the majority opinion is that Auer deference no longer applies in all situations. In other words, when property owners and administrative agencies have a dispute over the meaning and application of a regulation, the court is no longer required to take the agencies side in all circumstances.  The majority opinion lays out a few guidelines for when deference applies.

1)     To receive deference, the regulation at issue must be truly ambiguous. If the court can come to a definite meaning of the regulation by applying standard rules of construction, then no deference to the agency interpretation is appropriate.

2)     The agency’s interpretation must be “reasonable.” In determining the “reasonableness” of the regulation, the court can look to the facts on the ground. It doesn’t just have to take the agency’s word for it.

3)     The interpretation has to adopted by the agency itself through it’s regular procedures. The agency’s interpretation can’t be one adopted informally by just one department or simply thrown together for the purpose of litigation.

To be sure, these are meaningful limitations that place property owners in a better position than before. On the other hand, as Justice Gorsuch noted in a four-justice dissent, the new standard “forces litigants and lower courts to jump through needless and perplexing new hoops and in the process denies the people the independent judicial decisions they deserve.” The simpler solution would have been to allow courts to do what they do in all other cases—to decide “what the law is.”

As with most new precedents, it will take years of litigation before courts come to a consensus on how meaningful these new limitations on Auer deference really are.  Moreover, with at least four justices again signaling a willingness to overturn Auer all together, the doctrine may still be on life support. One judicial retirement could flip the balance in the other direction. In the meantime, property rights attorneys and administrative law nerds are going to spend countless hours trying to figure out what this all means.