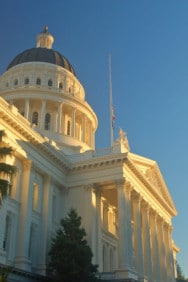 Every monthly meeting the California Coastal Commission releases a list of bills in the current legislative session that it is supporting. It can be a time consuming effort to review all these bills, but sometimes you find a gem that sheds light on the nature of the Commission’s long-term goals, and the read becomes worth it. Last week, the Commission’s monthly report was well worth the read.

In that report, the Commission expressed support for AB 976— a bill that would allow the Coastal Commission, by a majority vote of the  commissioners, to impose civil penalties for  Coastal Act violations prior to the property owner having an opportunity to challenge the existence of the violation in Superior Court.

In many circles, such an arrangement won’t raise any eyebrows. Administrative agencies often have the power to assess penalties after an administrative hearing, prior to any civil appeal. However, the Coastal Commission’s support for such arrangements reflects a broad disregard for due process that is troubling. The Constitution demands that property owners have a fair opportunity to present their claims before an impartial body before they can be deprived of their property rights. Until the mid twentieth century, that usually meant that an individual would have the opportunity to present his claims before a judge or jury before his life, liberty, or property would be taken. The judge in such circumstances could not have a personal interest in the case, otherwise, he wouldn’t be neutral. Indeed, existing law currently requires a hearing before the superior court before penalties for alleged violations of the Coastal Act may be imposed.

AB 976, and bills like it, turn that arrangement on its head. Pursuant to AB 976, the Commission, not the superior court, would have the authority to determine whether a violation exists and enforce civil penalties. In other words, AB 976 allows the Coastal Commission to act as judge, jury, and enforcement officer in its own case.  Proponents of the law argue that AB 976 will make Coastal Act enforcement more efficient. This is likely true. However, this efficiency is purchased at the cost of any appearance of due process that ordinarily would have attached to the adjudication of an alleged violation of the Coastal Act.