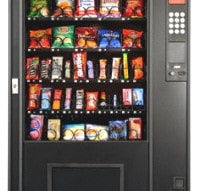 Do you remember high school? Do those memories include eating cookies from charity bake sales held by student groups,  a candy bar from the vending machine while you were waiting for the bus, or (heaven forbid) a soda after football practice? Times have changed.

Recent additions to the Code of Federal Regulations require that schools adopt federal lunch standards, prohibit vending machines on campus, and limit bake sales/fundraisers selling sugary foods. Schools that do not comply with these mandates lose all federal funding for their free and reduced price lunch programs. Because many schools rely heavily on this funding, the result has been the abandonment of both vending machines and fundraising bake sales across the country.

This has greater implications than students being nudged to eat a more healthy diet. For many small and low-income schools, vending machines and bake sales are used to make up significant budget shortfalls and enhance educational opportunities for students. Without this additional revenue, schools’ abilities to deliver a comprehensive and robust education may be affected.

Further, Local Educational Agencies (LEAs) lack the ability to work out a compromise or solution that takes into account dietary improvement, student preference, and revenue on the local level. Instead, the federal government has imposed a one-size-fits-all solution on schools across the country.

As it turns out, this sort of federal meddling in local schools may not only be bad policy, it may be unconstitutional. Under the Tenth Amendment, Congress may not extend its regulatory authority into matters of local concern (like school lunches) by withholding revenue streams. Congress may attach conditions to the grant of federal dollars only if such conditions are, among other things, related “to the federal interest in particular national projects or programs” and not unduly coercive. See, S.D. v. Dole, 483 U.S. 203, 207 (U.S. 1987) (“Dole”).

Until recently, the scope of these restrictions has been left largely undetermined by the courts. However, three years ago in NFIB v. Sebelius, 132 S. Ct. 2566, 2604 (U.S. 2012), the Supreme Court agreed with appeal attorneys who argued a law requiring that states adopt congressionally proposed expansions to their Medicaid programs or forfeit all federal Medicaid funding was unconstitutionally coercive under the Tenth Amendment. Given this baseline, future Dole challenges to other conditions placed on federal funding may be possible.

Here, one could argue that: 1) banning sugary food sales outside the cafeteria is not sufficiently related to the reduced lunch program to justify the condition on funding; and 2) the threat of losing all reduced lunch funding is unconstitutionally coercive to schools. Under Bond v. United States, 131 S. Ct. 2355, 2366-2367 (U.S. 2011) parents, teachers, students, or the school itself would arguably have standing to bring such claims because they were injured by the Federal government’s violation of the Tenth Amendment.